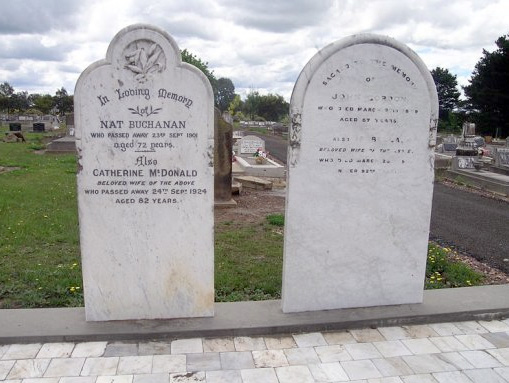 One of the first things seen when arriving at Walcha from the northern approach is a sign, pointing to the General Cemetery, with the inscription “Nat Buchanan’s Grave”.

Nat Buchanan was a pioneer pastoralist, drover and explorer, and the first man to drove cattle across the top end of Australia. It is claimed, in The Bulletin Magazine, that his exploration and droving feats earned him the title of the person that helped to settle more new country than any other man in Australia.

Nat Buchanan was born in Ireland in 1826. His family arrived in NSW in 1832 and settled in the Walcha area in 1839 at Rimbanda. As a young man, Nat was held at Pistol Point by the bushranger Wilson who took his horse and riding boots and left Nat with a broken down horse.

His career as an explorer began with Landsborough in 1859 and 1860 when they left Rockhampton and headed west. Further expeditions in 1862 and 1864 all headed west from Queensland to Western Australia.

He died on 23rd September 1901, aged 73 at Dungowan Creek, where he was originally buried. His wife and father-in-law were buried at Walcha, Buchanan was later exhumed from his Dungowan grave and reburied in Walcha General Cemetery beside them.

We acknowledge the Traditional Owners of the Walcha region and recognise their continuing connection to land, water and community. We pay respect to Elders – past, present and emerging – of the Dunghutti nation, and acknowledge the important role Indigenous Peoples continue to play within our community.